I was looking for an inexpensive projector to recommend using inside the Bed Forts when I came across one made out of cardboard. This made my wheels turn. I thought this would be a great project to teach kids about optics and add to the awesomeness of their Bed Fort. After ordering a few parts, I started experimenting and came up with the design that follows. 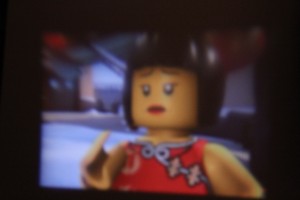 Lego Ninjago on the “big” screen of the DIY Phone Projector. 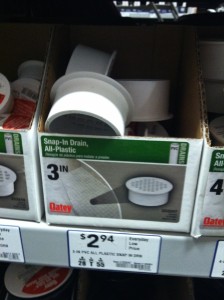 This was the only fitting I could find that was 3″ on the outside.

Here is the cutting guide utilizing one 4′ long 1×8. Make sure you measure before each cut since the previous cut will take out around 1/8″ because of the width of the blade. In other words, don’t draw all the lines at once and cut without taking the width of the blade into consideration.

Use a 3″ hole saw and a 7/32″ drill bit to make the holes in the front faceplate. You’ll want to utilize a drill press for the 3″ hole. Use a 1/2″ bit to make holes for the audio to come out. Since phones are so quiet anyway, you may want to interface with external speakers instead. 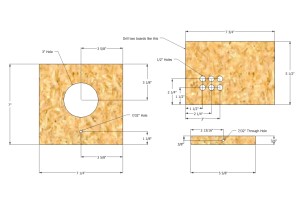 Mount the 5″x3″ mending brace to the back of the 2-5/16″ x 5-5/8″ phone holder by marking the holes and pre-drilling the wood with a 1/8″ bit. If you don’t pre-drill the holes, it’ll probably split. Drill through the metal plate, between the two screws, with the 7/32″ bit used earlier so the adjustment rod can travel through the plate (Note my inability to drill in the center…) You can drill from the side with the wood to make it easier. Be sure to clamp the metal plate so it can’t get caught by the bit and cut your hand by spinning. File any sharp parts of the plate smooth. 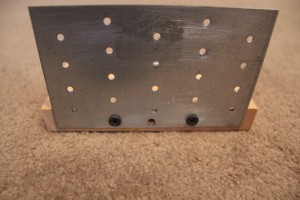 You’ll need to drill a clearance hole for the adjustment rod to go through.

On the front of the phone holder, you’ll want to drill the 7/32″ hole larger to allow an adjustment nut to be pressed inside. Use a 3/8″ drill bit and only drill around 1/2″ deep. Thread a nut onto the end of the threaded rod and press it into the phone holder until it bottoms out around 1/2″ in and unscrew the rod. 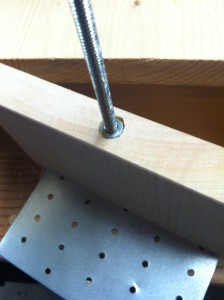 Configure the front, bottom and side pieces as shown below placing the audio holes near the back. Clamp the pieces together, pre-drill with a 1/8″ bit and fasten together with wood screws (2 per board should do). 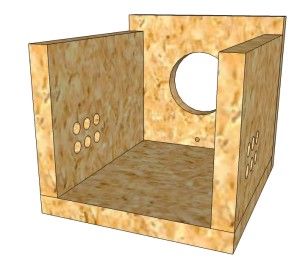 Configure the back panel as shown. Clamp the pieces together, pre-drill with a 1/8″ bit and fasten together with wood screws. I’d use 2 screws on each side and 2 on the bottom.

Attach the back panel for the DIY Phone Projector

Place the top of the projector on as shown below. Center the board, mark the holes for the hinges and pre-drill with a 1/16″ bit. Screw the hinges on and make sure the lid opens as desired. 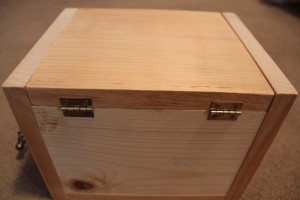 Place the hinges for the DIY Projector

Thread the 10-24 all-thread rod into the knob you have chosen. The knob I picked was a slightly different thread and I was able to forcibly cross thread it on (which is normally a bad thing but in this case it works well because you don’t want the knob to spin). Depending on the knob you choose, you may need to use a 10-24 tap to re-thread the knob. You may also need to apply Loctite threadlocker to make sure the knob doesn’t loosen when you spin it. The knob I chose also had a little spike to keep it from spinning. If yours has one, rip that sucker out with some pliers. 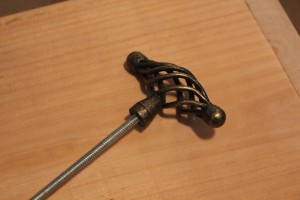 Thread the knob onto the all-thread rod. 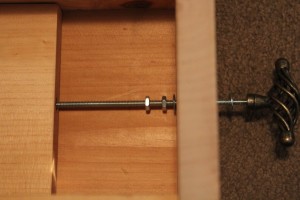 Insert the adjustment rod like so… with two nuts and two washers as shown.

Use a few washers and a pencil to make a uniform 1/4″ high mark around the 3″ PVC fitting while you spin it. I’m not going to lie… the next part is a little tough. Hold the PVC fitting in a vice and use a hack saw to cut along the line. It is easier to cut through one portion and then rotate the fitting to cut the next bit than trying to cut through the whole thing at once. 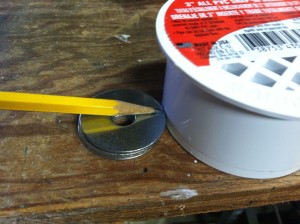 Mark around the fitting so you can cut it.

After cutting the ring off, place it on a sheet of sandpaper and move it around to smooth the edge you just cut. 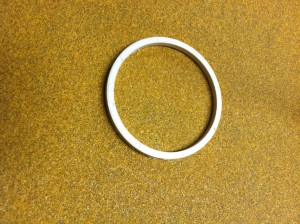 Move the ring around on a sheet of sandpaper to remove rough edges and make it more uniform.

Take the remaining part of the fitting and do the same thing to make it more uniform before cutting the second ring. Cut the second ring like the first one and sand it too. 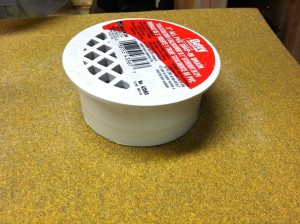 Smooth the fitting before repeating the process for the second ring. 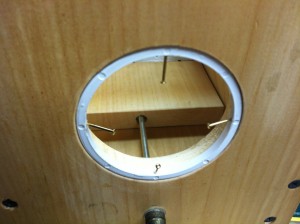 Mount the first ring flush with the front of the projector.

Remove the 3″ magnifying lens from its handle and place it behind the installed ring. Be careful because they like to fall and chip. Twist the second ring 90 degrees from the first one so the brads won’t hit the first brads when you push them in. Use a flat head screwdriver to push the brads in being careful to not scratch the lens.

Install the lens and mount the second ring.

Thread the adjustment rod nuts all the way to the front of the projector. Use needle nosed pliers to hold the one closest to the board while tightening the other one. Make sure there’s a little gap between the nuts and the washer so the knob will spin freely. 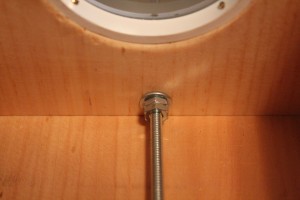 Add a little tacky putty to the back of the phone holder to keep the phone standing straight up. 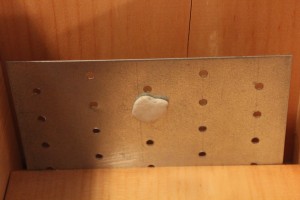 Use tacky putty as a simple way to hold the phone straight up.

And you’re finished! Here’s what mine looked like before staining and applying polyurethane to it. (I didn’t include audio holes in mine because I’m planning to plug in external speakers anyway)

The projector should project a diagonal image about 24″ across from around 4′ away and a larger image from farther away. Here’s my attempt to take a photo of the projected image.

Lego Ninjago on the “big” screen from the DIY Phone Projector. 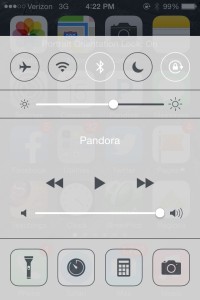 Use the iPhone setting screen to lock the orientation and turn up the brightness. To get to this screen, you just swipe up from pretty much anywhere.

Mounting brackets for attaching your phone projector to the inside of your Bed Fort.

I hope you found this interesting and let me know if you have any recommended improvements.